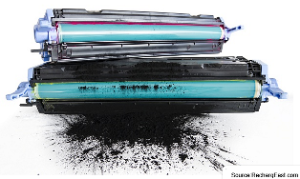 All you patent law nerds out there, grab your popcorn! The next blockbuster case you have been waiting for is about to hit the courts. On April 14, 2015, the Federal Circuit, on its own motion, ordered an en banc hearing of Lexmark International v. Impression Products, Inc.. In this patent infringement case, the Federal Circuit will decide whether it will overturn two of its own precedents on the patent exhaustion doctrine.

The plaintiff-patentee in this case is the printer manufacturer Lexmark, and the products-in-suit are Lexmark’s patent-protected toner cartridges. Lexmark offers the same cartridges through two separate programs: “Regular Program” cartridges at full price and “Return Program” cartridges at a discount. Customers of the Return Program must agree to use the cartridges only once and return them after use. Lexmark contractually imposes such restrictions on both the end-user consumers and the authorized resellers. In the current suit, Lexmark alleged that Impression Products, among other cartridges resellers, infringed its patents by acquiring, refilling, and selling refurbished cartridges under Lexmark’s Return Program.

In the April 14 order, the Federal Circuit articulated two questions it will review: (1) whether the Supreme Court’s 2012 decision in Kirtsaeng v. John Wiley & Sons, Inc. implicitly overturns the Federal Circuit precedent Jazz Photo Corp. v. International Trade Commission, which held that a foreign sale of a product never exhausts a U.S. patent; and (2) whether the Supreme Court’s 2008 decision Quanta Computer, Inc. v. LG Electronics, Inc. overruled the Federal Circuit’s precedent Mallinckrodt Inc. v. Medipart, Inc., which held that patent exhaustion doctrine does not preclude a patent owner from enforcing a “Single Use Only” restriction in a patent infringement action.

On the first question regarding foreign sales, plaintiff Lexmark relied on Federal Circuit precedent Jazz Photo, which held that a patent is exhausted only when the authorized first sale occurs in the United States. Since some of the cartridges Impression Products purchased were first sold in foreign countries, there is no patent exhaustion. However, in the 2012 copyright case Kirtsaeng, the Supreme Court held that a foreign sale exhausts a U.S. copyright. Based on this case, the defendant Impression Products argued that the same principle should apply to patent cases and all patent rights are exhausted.

On trial, Judge Barrett from the U.S. Southern District of Ohio sided with Lexmark on this question and held that Jazz Photo remains the controlling precedent for patent exhaustion. Judge Barrett reasoned that Kirtsaeng construed a distinct provision of the Copyright Act, which does not implicate the judicially created patent exhaustion doctrine.

On the second question regarding the “single-use-and-return” restriction, the plaintiff Lexmark relied on Mallinckrodt, which held that a sale under a single-use license does not exhaust the seller’s patent rights. Impression Products contended that the Supreme Court’s 2008 decision in Quanta Computer implicitly overturned the Mallinckrodt case because it held that an authorized sale still exhausts patent rights, even if those sales are subject to restriction.

On this question, Judge Barrett agreed with Impression Products that, under Quanta Computer, Lexmark had not established that the resellers of the Return Program cartridges were restricted or conditioned, and therefore Lexmark’s patent rights were exhausted.

The impact of the foreign sale question is apparent. For a long time, refurbishing products purchased overseas and reselling them in the U.S. has been presumed illegal under patent law. If the Federal Circuit were to overturn Jazz Photo, a reseller who does this can no longer be held liable. For any industry where the manufacturers imposes a price differential geographically, overturning Jazz Photo would create a new market of companies importing patented products overseas and reselling them for higher prices in the U.S.

The immediate impact of the single-use-and-return restriction question is less clear. In formulating the second question, the Federal Circuit left open the possibility of resolving the case by turning on the specific facts surrounding Lexmark’s restrictions without making a broad ruling.