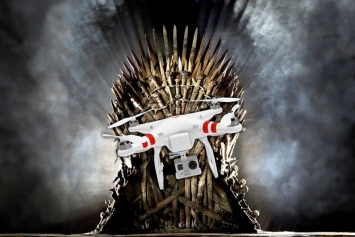 Sometime during the past decade or so we started taking the idea of making robots a part of our everyday lives more seriously. Naturally, we went from joking about making machines serve us by doing our menial chores, to teaching them to kill. Once our base needs for violence and subservience were satisfied, we quickly began adapting this technology for the highest, noblest, and most human of all endeavors: bothering our neighbors. Meanwhile, our local legislatures are trying to rein these nuisances in and we have to work with seemingly outdated common law theories until they’re finished.

I’m talking, of course, about small flying robots known as drones. What was once the pinnacle of modern robotics – despite being a glorified RC helicopter with a camera –  is now available from the corner 711 for $30. (No seriously. I’ve almost bought one out of curiosity.)

Drone sales have been rising rapidly and there’s no indication that the trend will stop anytime soon. People have an inexplicable habit of using these new tiny spybots to do awful stuff. For example, a drone pilot in Vancouver attempted to take pictures of a woman sunbathing on her private balcony sans shirt. And a Memorial Day Parade where a drone crashed into a crowd of spectators. The list goes on.

So, what to do about it? As anyone familiar with WJLTA’s Blog or the Washington Journal of Law, Technology & Arts itself may have noticed a running theme: the law is really slow when it comes to keeping up with new technology. Hence, it is struggling to figure out what to do with these little remote controlled flying cameras. So while legislatures attempt to put their remote-controlled ducks in a row, what legal theory can the average person use to fight robots trying to sneak a peek where they shouldn’t?

First we have the theory of trespass. While there used to be a rule that your property extended as far up as space and as far down as the core of the earth. (This had a complicated latin name that we should just ignore from now on.) Since then, airplanes were invented and that rule became impractical. However, the contemporary elements of a trespass claim are that the other person knowingly violated your private property (or person) in a way that resulted in direct injury or loss, but a drone operator might not have known they were flying over private property, and injury might be hard to prove. Of course, this is assuming you can track down the drone pilot in the first place. Essentially, by flying their robot over your property so close to the ground, they may be violating an interest in your privacy. If that hurts you in some way (say they break a window, or spy on you sunbathing naked), you might be able to do something about it. Click here for further details.

But if all these drones are invading my privacy, why I can’t I just sue for invasion of privacy? That’s a good question hypothetical straw person! Tort law also has you covered! If that drone has intentionally intruded upon your property in a way that is “highly offensive” and has caused actual damage then you might be able to litigate. Of course this is assuming you can prove the intrusion is offensive enough to meet that high standard. Don’t place your bets on winning a lawsuit because of a mere nuisance.

Local legislatures are doing their best in the meantime. Until then, we’ll just have to make due and hope for some kind of impact litigation. And if you happen to own one of these little flying peeping toms, please use it responsibly. Respect other people’s privacy, don’t fly them where they’re not wanted, and exercise some common sense.