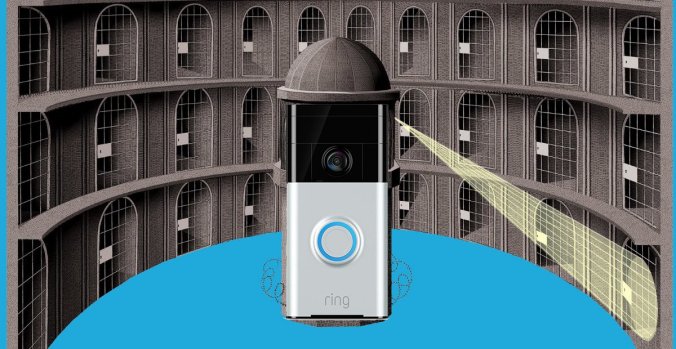 If every home on a street, in a neighborhood, or in a town had a Ring surveillance system, the individual cameras, taken together, could construct an extremely intimate picture of daily public life. By integrating facial recognition and contracting with local and federal law enforcement agencies, Amazon supercharges the potential for its massive network of surveillant consumers to comprehensively track the movements of individuals over time, even when the individual has not broken any law. Fully realized, these technologies set the stage for consumer generated mass surveillance.

Amazon’s Ring surveillance system dominates the growing video doorbell market. Ring, acquired by Amazon last April, is a system of home surveillance doorbell cameras which operate on an integrated social media platform, Neighbors. Neighbors allows users to share camera footage with other users and law enforcement agencies, as well as report safety issues, strangers, or suspicious activities. The platform aggregates user-generated reports and video data into a local activity maps and watchlists. Similar community platforms where neighbors can report suspicious persons or activity, such as NextDoor, are notorious for racial bias and profiling. This problem will surely be made worse by Amazon’s desire to automatically classify persons as “suspicious” through sentiment analysis and other biometric data collection. 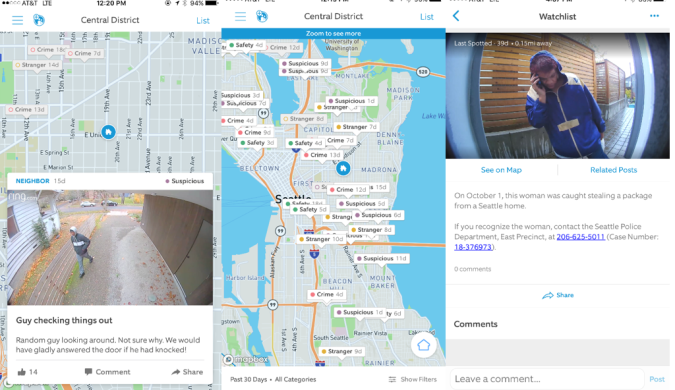 A recent patent application shows that Amazon will integrate their facial recognition product Rekognition into the Ring system, while also collecting and analyzing a litany of other biometric information. Many raise serious concerns about the integration of facial recognition to our contemporary digital ecosystem. Indeed, a unique consensus among researchers, lawmakers, advocates, and technology companies that facial recognition technology amplifies bias, intensifies mass surveillance and ought be subject to stringent regulation. [For more WJLTA coverage on algorithmic bias, see here.]

A centralized social network of private facial recognition cameras expands and streamlines traditional surveillance infrastructure by creating more data that is easily searchable. Hundreds of thousands of home security cameras will certainly generate massive amounts of data, but the integration of a social networking platform and facial recognition analytics cuts though the problem of irrelevant data. The Neighbors platform allows users and Amazon to identify and aggregate relevant data, while Rekognition can sift through both stored data and live visual feeds to locate and track individuals and groups.

By reorienting the surveillance relationship between individual and the state to the individual versus the individual, the Ring system fragments accountability and deprives the individual of the ability to challenge or escape data collection. It becomes harder to challenge a larger, consolidated surveillance apparatus because it is built consensually by private parties. Our neighbors have the right to watch and protect their private property, despite the objections of others. A diffused network of cameras reduces freedom of choice in how individuals protect their privacy because they are up against an architecture of fragmented private parties, rather than just the state.

If every Amazon Prime member in the United States had a Ring system, law enforcement could have access to the crowdsourced security footage of over 95 million people. A successful business model for Ring spells the evisceration of reasonable expectations of privacy in public life and the significant chilling of constitutionally protected activities by allowing government-technology partnerships to create a detailed picture of the movements – and therefore the lives – of a massive number of community members doing nothing more than going about their daily business. This enables law enforcement agencies to undertake widespread, systematic surveillance on a level that was never possible before.