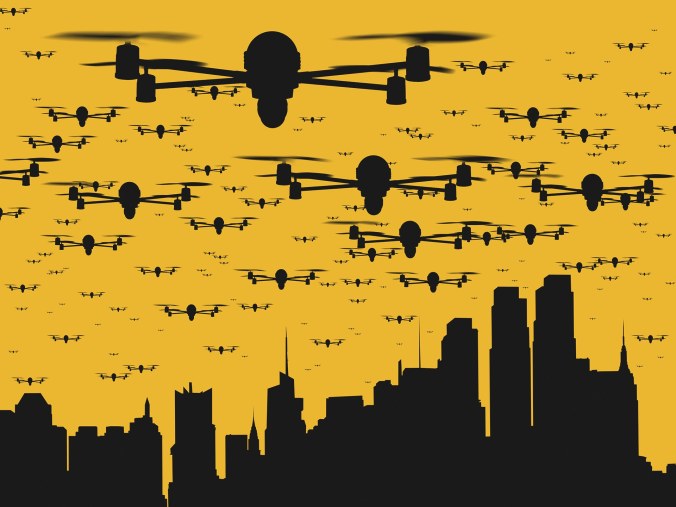 Unmanned aerial vehicles (UAVs), or drones, have been around for over a century. The first unpiloted aerial operations took place in 1849 when Austria attacked Italy using balloons equipped with explosives. Initially, unpiloted aircraft were used for military operations. The United States developed the Ketterig Bug during World War I. The unpiloted plane would be pre-programmed to a destination, where its wings would then detach and the body would deliver a 150-pound bomb. During World War II, B-17 and B-24 bombers were used as unpiloted aircraft. Pilots initially got the aircraft off the ground and then parachuted out as the UAVs continued to their destinations. However, none of the 50 manufactured UAVs were ever used in combat.

Modern military UAVs became increasingly popular in the 1980’s when the United States and Israel teamed up to produce the RQ2 Pioneer. In 2001, the United States flew Predator 3034 over Afghanistan, and the new technology paved the way modern drone usage. The Predator 3040 was used in 164 operational missions between 2001 and 2003. By 2011, the United States had over 11,000 drones in its inventory. By 2015, Low-Cost UAV Swarming Technology (LOCUST) was created and allowed for a single operator to manage dozens of UAVs.

Regulation of Private and Commercial Drones

With more drones in the airspace, private and commercial UAVs have been increasingly regulated. For example, to avoid major airport traffic issues caused by the flying objects, the federal government has enacted regulations surrounding drone use near airports. Additionally, a local man was charged with reckless endangerment after violating FAA regulations and crashing a drone into the Space Needle. For drones flying outside of Washington, D.C., the FAA prohibits drones weighing more than 55 lbs., unregistered or unmarked drones, flying above 400ft, flying in unclear weather, and operating near other aircraft. Some speculate that these regulations have prevented Amazon delivery drones from making their way into mainstream use. It has been five years since Amazon announced its plans to use drones to deliver packages under five pounds, and the company still has not integrated the technology into its regular deliveries.

In contemplation of private, commercial, and municipal drones entering the public airways, the FAA passed the Modernization and Reform Act of 2012. While the FAA had previously regulated traditional, piloted aircraft, the Act included drone regulations in addition to planes. In 2015, President Obama issued an Executive Order placing some limitations on drone use. The Order required federal government comply with the Privacy Act of 1974 while utilizing UAVs. It also set forth goals including compliance with civil rights and civil liberties protections, accountability, and transparency.

In Washington state, legislation has been introduced that would regulate private and commercial drone operation in 2015, 2016, and 2018. As of April 3, 2019, a bill that would prohibit drones from being 200 feet away from orca whales was being considered by the Washington State Senate. None of the policies have been enacted. Drone users in Washington can follow a set of guidelines published by the Washington Department of Transportation in order to learn more about state and federal laws regulating UAV use. Locally, the Seattle Municipal Code prohibits local drone enthusiasts from flying the remote-controlled devices in parks. Seattle Parks and Recreation cites injuries and displacement of wildlife as reasons for the ban. Seattle also regulates for drones used for filming.

Private individuals and corporations are not the only entities that have been eager to incorporate drones into their daily lives. Over the past few years, various law enforcement agencies across the country have begun using drones in their daily practices. For example, in 2015 North Dakota became the first state to legalize armed police drones. Two years later, Boston police purchased three drones to be used for law enforcement purposes within the city. In 2018, Chicago advanced a bill allowing police drones to observe protestors. According to the Center for the Study of the Drone, “910 state and local police, sheriff, fire…and public safety agencies have acquired drones” as of May 2018, and law enforcement makes up two-thirds of those agencies.

Law enforcement agencies have begun using drones for aerial surveillance. Drones, which cost roughly $6000 to equip with a high resolution camera, are a smaller and less resource-intensive surveillance alternative to a $500,000 to $3,000,000 helicopter. Recently, the New York Police Department introduced 14 drones into its equipment to be used for surveillance. The ACLU voiced serious privacy concerns, including fear that law enforcement will try to shut down efforts to engage in constitutionally permissible demonstrations. Impermissible surveillance is no stranger to NYPD. In 2016, the ACLU brought a suit against the NYPD for unlawfully surveilling Muslim individuals. The law enforcement agency settled in Raza v. City of New York, yet admitted no wrongdoing. Not only is there fear of improper surveillance, but there is also concern that surveillance footage gathered by drones will be stored for long periods of time. While 30 days is the current limit, as Michael Sisitzky and Simon McCormack point out, “The retention period can be extended ‘if the images are needed for civil litigation, subpoena production, FOIL requests or other legal process.’”

Private industry has seen law enforcement’s willingness to integrate this technology and has begun developing their products accordingly. For example, in June 2018, DJI (the world’s largest drone manufacturer) and Axon (the leading producer of police body cameras, formerly Taser) teamed up to launch a drone surveillance system, Axon Air. The system has a feature, Active Track, which allows the camera to lock on to a target and for the drone to follow the target as they move. Not only can these police drones track individual targets, but Axon confirmed that it is considering adding facial recognition to its camera. Axon intends to sell these drones directly to law enforcement agencies. Many law enforcement agencies, including local Seattle Police Department, already use Axon body cameras and store footage on the companion website, Evidence.com.

It is important to continue thinking about safety and privacy implications as we integrate drones into our airways. After exploring drones’ historical place as a military tool and their recent explosion in the private, commercial, and law enforcement contexts, we should continue to regulate their usage in all contexts with the best interests of citizens in mind. To become more involved in drone regulation and activism, you can become volunteer with or donate to organizations committed to technology and privacy issues. You can also testify on drone legislation to your state and local lawmakers.

One thought on “Status Update: What’s going on with drones?”