Grafitti is often considered a form of vandalism, or a criminal act. However, at the 5Pointz building in Queens New York, it is the white washers who are being called vandals. END_OF_DOCUMENT_TOKEN_TO_BE_REPLACED 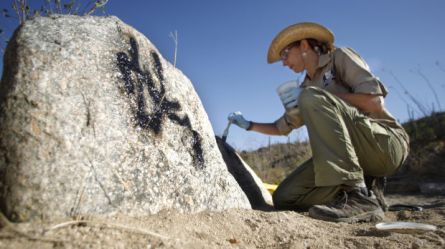 State and national parks are sanctuaries, and the Emerald Gem that is the Pacific Northwest has no shortage of outdoor devotees ready to protect its parks’ soul-achingly beautiful mountains, tapestries of forests, and glimmering, shimmering lakes, streams and ocean coasts.

How shocked would nature-lovers be to learn that, over the last several years, graffiti has moved to national parks? The most nefarious instance involved a 21-year-old from New York who painted exhausted-looking persona on logs, in caves, and even the ground, in as many as eight different national park locales. Tagging each oeuvre with “#creepytings,” she deliberately ousted herself by posting pictures on Instagram. A second case involved a European graffiti artist who spray-painted his signature tag on a boulder in Joshua Tree National Park, also posting on Instagram. After public outcry and an initial denial that he had been on park grounds, the artist paid a National Park Service fine to the U.S. District Court. END_OF_DOCUMENT_TOKEN_TO_BE_REPLACED