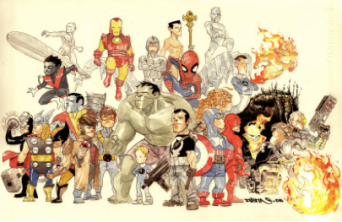 Comic book characters are more famous now (and more valuable) than they have ever been. For example, Marvel Studio’s “Captain America: The Winter Soldier” grossed over $714 million worldwide. When Marvel launched its “Phase 3” platform of movies (extending “Marvel Universe” through 2020), the Internet exploded with social media craze. Just mentioning Marvel Studio’s slate of movies isn’t enough: this infographic shows every announced comic book movie for all major movie studios through 2020. Some of the comic characters in these billion-dollar movie ideas were originally created over seventy-five years ago and for an entirely different medium: comic strips. When these characters were first created, no one had any idea that they would one day gross billions of dollars, causing legal battles to rage for the copyrights of these characters.

One of the most important copyright legal battles has raged for nearly six decades over one of the most iconic characters of all time: Superman. Around 1938, the creators, Joseph Shuster and Jerry Siegel, sold their rights to the Superman storyline to DC Comics for $130.00 and additional, annual “work for hire” payments for supplying material to DC Comics. Once the character became widely popular, the creators tried to get their rights back. While the creators have since passed on, their estates have found a new means to attack the copyrights of the work: the 1976 Copyright Act’s termination provisions. END_OF_DOCUMENT_TOKEN_TO_BE_REPLACED