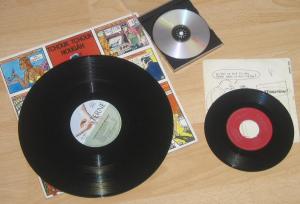 Record companies are responding to poor album sales by seeking additional rights from artists beyond those to their music. Under these “360-degree deals,” record companies get access to revenue from sources including touring and merchandise, book deals, fan clubs, and even movie and television careers. The increased use of 360 deals reflects the recording industry’s shift away from goods such as records and toward services such as streaming music, cell-phone ringtones, and concert ticket sales.

Before digital music and MP3 files, a recording contract involved an upfront payment to the musician and funding to produce a record. Success was measured by the number of records sold (“units”); artists earned royalties after record companies recouped their investment in producing the record. Unit sales have fallen in half over the last decade, and today consumers purchase more individual MP3 tracks than albums. As a result, record companies are seeking 360 deals so that they receive rights to non-recording activities, such as entertainment rights or rights to publicity.

A typical 360 deal clause might grant the record label a “right to participate in any and all of an artist’s activities in and throughout the entertainment industry including, without limitation, activities as a singer, performer, musician, writer, composer, author, publisher, producer, mixer, or actor, in connection with tours, performances, merchandizing, fan clubs, advertisements, sponsorships, endorsements, or any public appearance.” Other rights might include use of the artist’s name, likeness, logos, websites, or videogames. The record company’s interest in these activities is obviously negotiable, but might include a percentage of publishing receipts, tour revenues, and other entertainment net receipts.

Such deals may benefit artists by providing healthy advances and funds for tours and merchandizing. Record companies might also put less pressure on artists to produce “hits” if record companies share in the revenue stream from touring or other nonrecording activities. On the other hand, many 360 deals simply take revenue streams traditionally reserved for the musician but do not create a legal obligation to develop these revenue streams.

Artists who agree to a 360 deal must obtain explicit guarantees that the record company will offer the services necessary for carrying out any collateral activities, such as video production, partnering with cell phone companies, or distributing music through websites. Record companies should also explicitly agree to actively participate and support such activities in order to receive any revenue from them.

Artists must also carefully analyze any proposed agreement to determine whether an active interest 360 deal creates an affirmative obligation to assist the artist with promotion or merely creates a right to veto or approve artist activities. The artist might also be able to negotiate exclusions in which the record company does not take any revenue above or below certain thresholds. For example, the artist might negotiate an agreement in which the record company has no interest in on-off events that net less than $10,000.

In summary, 360 deals can be extremely complex, and artists must carefully review the entire contract and ask tough questions about what sources of revenues are included and excluded, how terms in the contract are defined, how percentage splits are calculated, and what services the record company will provide to support these additional revenue streams. Artists should be wary of generic clauses granting broad rights to “all other revenues.”

For more information on 360 deals, please see the following sources:

Douglas Okorocha, A Full 360: How the 360 Deal Challenges the Historical Resistance to Establishing a Fiduciary Duty Between Artist and Label 18 UCLA Entertainment Law Review, available at http://ssrn.com/abstract=1707679.

2 thoughts on “Thinking Outside the Record: 360-Degree Deals in the Music Industry”