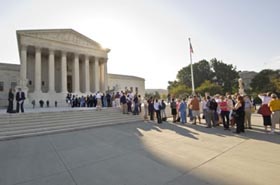 On Monday, the Supreme Court released its highly anticipated decision in the Fourth Amendment case Unites States v. Jones. The decision, unanimous in favor of respondent Jones, upheld the D.C. Circuit’s reversal of his drug-related convictions.

Jones came under suspicion of trafficking in narcotics in 2004. He was made a target of an investigation that included attaching a GPS tracking device to the car he frequently used. As implemented by law enforcement, the use of this tracking device fell outside the scope of any warrant police had obtained. The device was used to track the vehicle’s location for 28 days and collected more than 2,000 pages of data.

The Supreme Court agreed with the D.C. Circuit that this investigative behavior, outside the scope of a search warrant, was a violation of Jones’ Fourth Amendment right to be secure in his effects against unreasonable searches. The majority position, written by Justice Antonin Scalia, stated that the Court had “no doubt that such a physical intrusion would have been considered a ‘search’ within the meaning of the Fourth Amendment when it was adopted,” citing to, among other authorities, an English case from 1765.

Justice Samuel Alito concurred, agreeing that use of the GPS device was unconstitutional, but for a different reason. He challenged Justice Scalia’s reasoning, stating: “Ironically, the Court has chosen to decide this case based on 18th-century tort law.” Justice Alito chose instead to focus on whether the investigative methods violated Jones’ reasonable expectation of privacy, a test first enunciated in Justice Harlan’s concurrence in Katz v. United States.

While the Court’s division regarding the proper line of reasoning is interesting in and of itself, something bigger appears to be at work in this decision. For some time, it has been accepted that advances in technology have served to decrease expectations of privacy, and thus Fourth Amendment protections. A recent article from this Journal discussed expectations of privacy in unsecured wireless networks. See also California v. Ciraolo, a Supreme Court case discussing aerial observation of a person’s backyard, and an article by Chief Judge Alex Kozinski of the Ninth Circuit, in which he and his law clerk argue that society’s willingness to allow their behavior to be tracked by private companies has killed the Fourth Amendment.

The Court’s decision in Jones seems to reject this trend. Despite the increasing ease with which law enforcement can track people, and despite the fact that Jones may not have expected privacy in his travels on public roadways, the court nonetheless held that his Fourth Amendment rights had been violated. While some note that the majority decision may have adopted the narrowest possible ruling, it is nonetheless a strong indicator that the High Court may be changing the course of the Fourth Amendment’s protections in an increasingly technological world. In particular, Justice Sotomayor, who joined the majority opinion but wrote a separate concurrence, provided a powerful description of the issue:

More fundamentally, it may be necessary to reconsider the premise that an individual has no reasonable expecta­tion of privacy in information voluntarily disclosed to third parties. This approach is ill suited to the digital age, in which people reveal a great deal of information about themselves to third parties in the course of carrying out mundane tasks. People disclose the phone numbers that they dial or text to their cellular providers; the URLs that they visit and the e-mail addresses with which they correspond to their Internet service providers; and the books, groceries, and medications they purchase to online retailers. Perhaps, as Justice Alito notes, some people may find the “tradeoff” of privacy for convenience “worthwhile,” or come to accept this “diminution of privacy” as “inevitable,” and perhaps not. I for one doubt that people would accept without complaint the warrantless disclosure to the Gov­ernment of a list of every Web site they had visited in the last week, or month, or year. But whatever the societal expectations, they can attain constitutionally protected status only if our Fourth Amendment jurisprudence ceases to treat secrecy as a prerequisite for privacy. I would not assume that all information voluntarily disclosed to some member of the public for a limited purpose is, for that reason alone, disentitled to Fourth Amendment protection. (Internal citations omitted)

It will be interesting to see whether this case becomes a turning point in Fourth Amendment jurisprudence or a mere outlier in a continuing reduction in Americans’ right to privacy.