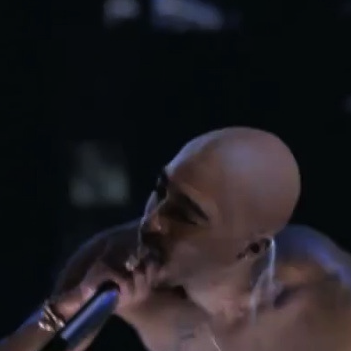 After over a decade and a half, deceased American rapper Tupac Shakur is still making noise, but this time, not by way of music charts, but in the realm of intellectual property law. This past April at the Coachella Valley Music and Arts Festival, Tupac made his posthumous debut on stage via a hologram like image during Dr. Dre and Snoop Dogg’s festival performance. The Coachella audience (I was there), and people across the world were amazed to see a resurrected Tupac on stage interacting with the crowd seamlessly along with the two living legends beside him. Soon thereafter, music industry execs began eyeing the potential of this technology applied to other deceased artists such as John Lennon, Michael Jackson, and Jimmy Hendrix. According to Nick Smith, the president of AV Concepts—the company behind the Tupac hologram—“[y]ou can take [the artists’] likenesses and voice and . . . take people that haven’t done concerts before or perform music they haven’t sung and digitally recreate it.” Thus, it would seem, the possibilities are endless for truly unique uses of holographic artists in both a commercial and non-commercial setting.

With expanded use of this technology on the horizon, IP lawyers have begun to wonder about the application of copyright and right of publicity law to this technology. Under copyright law, an artist is granted exclusive rights over his or her public performance, effectively allowing the artist to control who can perform their music in public. This seems relatively straightforward until you consider the possibility of a hologram singing an entirely new song. Copyright law in its present form does not speak to the question of who would own the rights to the new song.

Like copyright, questions surround holograms’ use in the context of the right of publicity. In a nutshell, the right of publicity is granted by 31 states that allows individuals (generally, but not always, celebrities) to control the commercialization of their name or likeness. When an individual dies, this right typically passes to the individual’s estate. Given this, the IP blog of Ervin Cohen & Jessup LLP points out:

. . . [T]he use of impersonators and images that represent a likeness of a celebrity violate their right of publicity, specifically when they are used for commercial purposes . . . This would make it likely that companies that wish to use holograms will have to secure permission from the artist prior to using the technology.

However, only 19 of the 31 states extend this right post-mortem, allowing for the possibility that an artist’s holographic performance could be produced without the worry of violating a deceased artist’s right of publicity. This raises serious concerns when put in context, for as Vera H-C Chan of Yahoo! News pointed out in her Trending Now blog:

. . . [W]hat if someone revived a historical figure, be it Dr. Martin Luther King Jr. or Pol Pot, to appear at an extremist rally? There’s a copyright issue if the King avatar gave the “I Have a Dream” speech, but legal territory gets muddier if it’s made to say something else.

Simply put, we just don’t know the answer to these questions. What we do know is Tupac’s performance has raised plenty of questions in the world of IP law, and it is only a matter of time before some of these legal questions get answered in the courtroom.