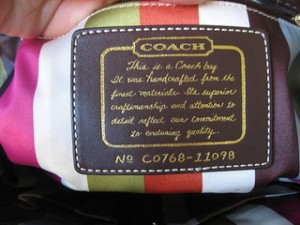 In Coach, Inc. v. Allen, 2012 U.S. Dist. LEXIS 100829, at *28-29 (S.D.N.Y. July 18, 2012), the court ruled on summary judgment that “[b]ecause Defendants have clearly acted in bad faith by distributing counterfeit versions of Coach’s merchandise, I grant the request that Coach receive the maximum amount of statutory damages for willful infringement for twenty-two separate acts of infringement.” As noted by the court, “the statutory maximum [is] $2,000,000 per counterfeit trademark.” Id. at *23. While the court declined to show its math, twenty-two multiplied by two million equals forty-four million dollars—$44,000,000. What happened?

Counterfieting: First, Linda Allen and Courtney L. Allen openly sold counterfeit versions of Coach’s products online, through their own websites and eBay.com, and they were not shy about it. Id. at *9-11.  For example, defendants’ website BellaFashion.net falsely identified its products as Coach handbags and accessories. Id. at *4. Admitting that these Coach products were in fact counterfeit, “the Website contained several disclaimers stating that the products were not ‘original’ and that the Website was ‘in no way affiliated with the authentic manufacturers.’ ” Id. Linda Allen was already subject to a permanent injunction for distributing counterfeit Chanel products. Id. at *5.

Going Pro Se: Then, Linda and Courtney Allen chose to represent themselves as pro se litigants. Id. at *2. Coach began by sending the defendants a cease-and-desist letter. Id. at *8. Using the registered email for BellaFashion.net, Linda Allen responded “I have no further merchandise as I purchased items upon demand from customers . . . . I sold very little . . . .” Id. at *3. Linda thus admitted in writing to willfully infringing Coach’s trademarks. In responding to Coach’s interrogatories, Linda claimed that she knew of no other individuals involved with BellaFashion.net. Id. at *10. But when deposed, Linda Allen “was immediately able to identify” John Vanasco, Jr. as involved with the website. Id. at *11. After Coach moved for summary judgment, the defendants had until May 29, 2012 to respond to Coach’s motion. Id. at *13. Missing this deadline, on June 5, 2012, Linda and Courtney Allen “faxed unsworn letters to the Court containing general denials of affiliation with the websites.” Id. Perhaps indicative of defendants’ decision to represent themselves generally, the court commented that it would “accept these papers as timely; however, they are utterly devoid of substances and do not suffice to raise any general issues of material fact.” Id. at *13-14.

The Online Paper Trail: Because the defendants struggled to respond to discovery requests in a timely and truthful manner, “[o]nly through subpoenas to the third parties did Coach discover any meaningful information about [d]efendants’ illegal activities.” Id. at *1-2. Records subpoenaed from PayPal, Inc. proved that Linda Allen received monies through her merchant account for BellaFashion.net. Id. at *6. Further, these records showed that MyClassyFashion.com, a website owned by Linda Allen and previously implicated in selling counterfeit goods, was converted into BellaFashion.net. Id. Despite Linda Allen’s statement that she never sold counterfeit goods on eBay.com, “user feedback statements” provided by eBay.com showed that she had. Id. at *11-13. And records from GoDaddy.com, Inc. revealed that Linda Allen was the administrative contact of BellaFashion.com, confirmed by her home address, fax, and personal email. Id. at *5.

$44,000,000 is a shockingly large judgment. Even more shocking is the defendants’ attitudes in this case—the open selling of counterfeit goods, the half-hearted participation in legal proceedings against them, and the belief that they could lie their way out of the situation. But the internet is not anonymous—at least when it comes to commerce—and subpoenaed documents from third parties provided the court enough evidence to find willful infringement on summary judgment.