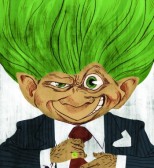 The Supreme Court has accepted review of two cases that could slow the rash of unfounded patent litigation that many have seen as slowing innovation, clogging courts, and unjustly enriching companies that do not produce anything of value. Currently almost 60 percent of all patent cases involve so-called patent trolls, up from 19 percent in 2006. And these numbers do not count the lawsuits that are not filed but are instead settled outside of court. With all these problems lurking in the background, many think the Supreme Court will use this opportunity to change the patent litigation calculus by making it less profitable for patent trolls to bring frivolous and costly lawsuits.

There are three main problems with the current system, which allows patent trolls to sue companies based on minor or nonexistent infringements on patents. Some argue that rather than promoting innovation, our current patent litigation system slows innovation because companies are weary of having to pay patent trolls at every turn. An equally serious problem is that these cases are burdening an already crowded court system. But perhaps most importantly, patent troll companies do not produce anything of value. Even President Obama has weighed in with his disapproval of patent trolls that just come in and “highjack somebody else’s idea.”

The two cases the Court has agreed to hear are Highmark v. Allcare Health Management Systems and Octane Fitness v. Icon Health and Fitness. In Highmark, the question presented to the Court is whether the Court of Appeals for the Federal Circuit must defer to a lower court’s judgment that attorney’s fees should be awarded because a patent infringement claim is objectively baseless. Currently, the Court of Appeals must defer to lower court’s ruling under 35 U.S.C. § 285, which permits the court to award attorney’s fees in exceptional cases. In Octane, the issue before the Court is whether the Federal Circuit’s use of a rigid and exclusive two-part test for deciding if a case is exceptional improperly raises the standard for accused infringers but not patent holders. The outcome of these cases could have a significant impact on alleged infringers’ ability to fight patent trolls, since the availability of attorney’s fees awards incentivizes justified defenses and punishes meritless suits intended solely to provoke settlements.

While at least one state has started to push back to protect small business from unwarranted litigation by patent trolls, the Court could take a major step in curbing trolling by lowering the standard for awarding attorney’s fees. The power imbalance between the trolls—or “non-practicing entities” as they prefer to be called—is that since they do not actually produce anything and do not have the corresponding documents, their discovery costs are very low.  Further, their lawyers typically work on a contingent fee basis, so they do not have to be paid unless they win.  On the other hand, a small business or large business could rack up millions in legal fees to defend itself from a lawsuit lacking substantial merit. This system provides an incentive for companies to settle with the patent trolls even if they are not infringing on a particular patent and thus feeds more fuel to the fire.

No matter how the Supreme Court rules, patent trolls and the companies they target will be following these two cases closely.