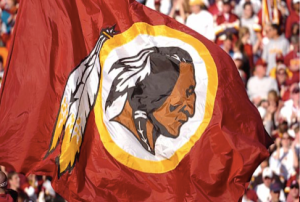 Once again, the United States Patent and Trademark Office has cancelled the National Football League’s trademark registrations for the nickname ‘Redskins,’ in association with the Washington Redskins football team, on the grounds that the name disparages Native Americans, and this time the decision could actually stick.

On June 18, 2014, the USPTO’s Trademark Trial and Appeal Board cancelled six trademark registrations for variations of the name ‘Redskins’ registered under the Lanham Act by respondent Pro-Football, Inc. (owner and operator of the Redskins). The Board held that, pursuant to Section 14(3) of the Lanham Act, the trademarks had been registered in violation of Section 2(a), which prohibits trademarks consisting of “matter which may disparage . . . persons, living or dead, institutions, beliefs, or national symbols, or bring them into contempt, or disrepute.” After an exhaustive review of the record, the Board concluded that the petitioners—five Native Americans—had sufficiently demonstrated that a “substantial composite of Native Americans” found the name to be disparaging in connection with Pro-Football’s services. The Board noted that a ‘substantial composite’ of a group did not necessarily mean a majority of that group, and it rejected any argument that a ‘substantial composite’ of a group required homogenous opinions within that group. Interestingly, while the Board’s decision cancelled registrations pertaining to the name ‘Redskins’ and several variations of the name that occur in combination with logos, the plain Washington Redskins team logo itself was not cancelled because it was not at issue in the case.

This is not the first time the Board has reviewed the ‘Redskins’ name. In 1999, the Board cancelled the very same set of trademark registrations, but on appeal the District Court for the District of Columbia reversed the Board because it found that laches barred the claims of one of the petitioners. The D.C. Circuit affirmed the District Court’s holding on the laches issue—neither court ever reached the merits of the case. But the Board held firm in the meantime, continuing to reject the term ‘Redskin’ and finding it disparaging in other contexts. This time around, though, the petitioners believe they have eliminated the laches issue that ultimately sank the previous case.

The Board’s most recent decision comes amid increasingly louder public calls for Washington Redskins owner Dan Snyder to change the team’s name, including a letter signed by 50 U.S. Senators to NFL Commissioner Roger Goodell, urging League leadership to change the name. President Obama also personally weighed-in by saying that if he were in Snyder’s position he would consider changing the name. Should Snyder elect to change the team’s name (he has indicated that he has no intent to do so), he would not be the first: Cooperstown Central School District in Cooperstown, New York, recently voted to change Cooperstown High School’s ‘Redskins’ mascot after being urged to do so by students who found the mascot offensive to Native Americans. Miami University of Ohio, which also once used the ‘Redskins’ name, changed its mascot some time ago as well.

Although the Board’s decision might be a moral victory for the petitioners and their supporters, the decision may have little real-world impact because it only cancels the official registrations for the trademarks but does not prohibit their continued commercial use or the ability to profit from them. Also, the trademarks’ owners will likely feel confident that because they had a similar decision overturned before they will be able to do so again. Opponents of the team’s name will likely have a better chance of eliminating the name by bringing enough public pressure to force the team to make a change. Perhaps the most interesting question going forward, though, is what effect the Board’s decision may have on other sports franchises with names that refer to Native Americans, such as the NFL’s Kansas City Chiefs, MLB’s Cleveland Indians and Atlanta Braves, the NHL’s Chicago Blackhawks, and the NBA’s Golden State Warriors. Might their marks be challenged next?