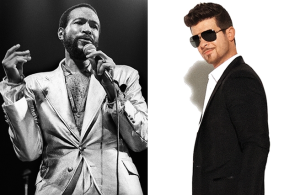 The ongoing saga of Robin Thicke, one marked by bizarre admissions, inconsistent statements, and general incredulity, continues. On October 30, Judge John Kronstadt, sitting in the Central District of California, denied Thicke’s motion for summary judgment in a highly publicized case against the heirs of Marvin Gaye.

We first reported on the suit nearly a year ago–-the Gaye family claims that two songs by Robin Thicke, “Blurred Lines” and “Love After War,” infringe on the copyrights of two Gaye compositions, “Got to Give It Up” and “After the Dance,” respectively. Both sides submitted their dueling musicologists, and the conclusion is this: the possibility of substantial similarity between the songs is high enough to go to trial. Given that direct evidence of copying is exceedingly rare in copyright cases, courts allow plaintiffs to show copyright infringement by (1) showing that the defendant had access to the work purportedly copied, and (2) that substantial similarity exists between the works at issue. The first point, access, wasn’t contested, but the dispute over the second, with Kronstadt’s ruling, warrants trial.

The court also dismissed as irrelevant Thicke’s inconsistent statements about whether he’d intended to create an homage to Gaye or somehow kept the soul singer in mind while recording “Blurred Lines.” While such comments may have some bearing under the “inverse-ratio” rule, where a higher showing of access will lower the bar on showing similarity, Thicke all but conceded on the issue of access—he’d obviously heard Gaye’s works before. While this rule may have some consequence in the actual trial, Kronstadt ruled that “[it] does not affect the analysis in the summary judgment setting.”

But it’s not all smooth sailing for the Gaye family. The court sharply limited the universe of potential similarity between the two songs by ruling that, because the Gaye compositions were copyrighted before the 1976 Copyright Act (which allows statutory copyright protection for compositions when they are fixed in “phonorecords” like master recordings) took effect, the recording themselves are not at issue. Only the sheet music, or “lead sheet,” can be considered because Gaye’s songs are subject to the requirements of the 1909 Copyright Act. That Act requires one of two things to afford a musical work protection: (1) that the work was published with the proper notice, or (2) that a copy of the composition was deposited with the register. A sound recording doesn’t constitute “publication” under the 1909 Act. So, for the purposes of establishing substantial similarity, the Gaye family is limited to lead sheets deposited with the Copyright Office. As such, some potential similarities between the two songs, such as Gaye’s choice of percussion in “Got to Give It Up,” can’t be considered in the suit.

The trial is set to go forward on February 10, 2015. While it’s entirely possible that the parties settle before that time (music label EMI settled out of the case back in January), given the strange circumstances and entrenched positions by the parties, this could become the most prominent case about potential song theft since George Harrison’s “My Sweet Lord.”