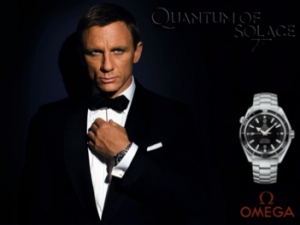 Normally, James Bond is the fictional MI6 spy who subdues international chaos before it starts. However, James Bond has yet to stop the decade-long battle between Omega S.A. and Costco Wholesale Corporation. Neither side has backed down in their international fight to claim the title for the “first sale doctrine” of a watch made famous by Mr. Bond.

In 2003, Omega and Costco “discussed the possibility of Costco carrying Omega watches,” but an agreement was never met. A year later, Costco began purchasing Omega “Seamaster” watches on the “gray market” to sell in Costco warehouses in the United States. (Gray market goods, or parallel imports refer to genuine branded goods that are imported into a market and sold there without the consent of the owner of the trademark or copyright of the goods.) The Seamaster watches bore the “Omega Globe”—a copyrighted symbol—on their backs. When Omega caught wind of Costco’s actions, it sued Costco for copyright infringement, specifically the importation of copyrighted work without the copyright holder’s permission. Costco responded that its importation right was a subset of its distribution right, and that the first sale doctrine provided it with an exception to the distribution right.

Last week, the Ninth Circuit upheld the district court’s (now second) ruling, granting Costco summary judgment. The Ninth Circuit found that Omega, and not Costco, misused its copyright of the Omega Globe to expand its limited monopoly impermissibly. The court relied on the Supreme Court’s ruling in Kirtsaeng v. John Wiley & Sons, which held that the first sale doctrine applied to copyrighted goods sold validly abroad. Because Omega conceded that it authorized a first sale of the watches in a foreign jurisdiction, its right to control importation and distribution of its copyrighted Omega Globe expired after that authorized first sale, “conclusively reaffirm[ing] that copyright holders cannot use their rights to fix resale prices in the downstream market.”

The effect of the Ninth Circuit’s ruling could go well beyond the parties involved. It could have huge implications on how other companies, both large and small, begin importing luxury goods from abroad. Although Costco only sold 43 Seamaster watches, this decision could open the door for much larger amounts of gray market goods to enter the U.S. market. So, what can U.S. goods manufacturers do to combat an influx of grey market goods? One American Bar Association Business Law report has summarized issues with grey market goods, and how to combat improper importation.

The ABA report recommends the following: U.S. distributors should educate the public by putting a notice on their websites (1) defining the gray market; (2) alerting dealers, potential purchasers, and current owners of the existence of gray market products; (3) detailing the differences between the gray and domestic goods; (4) clearly stating that gray goods imported into the United States are done without the U.S. distributor’s consent or knowledge; (5) indicating that gray goods do not fall under warranty and will not be serviced by authorized dealers; and (6) providing a toll-free telephone number to report gray market goods. While this list is not exhaustive, it does give U.S. distributors, and their counsel, something to think about and discuss.