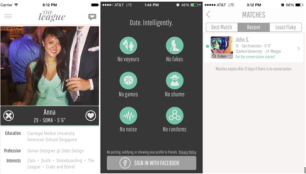 “You’re smart, busy & ambitious. You don’t need a dating app to get a date—you’re too popular as it is. But you should join The League.” The League is a new online dating app that is stirring up controversy and has been coined an elitist app for its highly selective and exclusionary model. Following in the success of dating apps such as Tinder and Hinge, The League aims to “help you find the right partner, provided that you fit in.”

Today, the online dating industry is worth over $2 billion. The League, one of the newest niche online dating apps available, launched in November 2014 and raised $2.1 million in venture capital within two months. The League prides itself on being distinguishable from other dating apps. This new dating app is discreet and hides your profile from friends, business contacts, and co-workers. The League also promises to help you “spend your time more … intelligently.” Furthermore, in an attempt to counteract the overabundance of choices available on other dating apps, The League claims to simplify your dating life by scouting potential matches for you based on your preferences. A member’s profile can only be viewed by another member who meets his or her preferences. The League also assures that there are “no fakes”—you can be certain that people are who they say they are because of The League’s thorough application process. Although The League has only been launched in San Francisco, the app already has 5,500 members just within San Francisco. However, there are almost 80,000 prospective members currently on the wait list.

In order to join The League, prospective members have to apply and share both their Facebook and LinkedIn profiles. A computer algorithm then helps sort through applications before The League decides whether to approve people based on selective criteria, including education, job, neighborhood, interests and photos. Amanda Bradworth, Founder and CEO, claims that The League is striving to build a diverse community, but it has been difficult getting creative members such as writers or artists because they often do not have LinkedIn profiles.

Currently, thirty percent of The League’s users have advanced degrees, and eighteen percent are executives, vice presidents or company founders. The League’s selective and elitist model is being criticized for effectively discriminating against people of lower socioeconomic classes by using education and job status as admission criteria into the app. Other online dating sites have faced discrimination charges as well. In 2008, online dating service eHarmony was charged with discriminating against gay and lesbian couples by not allowing users to select a sexual preference and the company eventually settled. A potential discrimination action against The League would require a similar argument. However, the crux of the legal theory against eHarmony was that it was discriminating against sexual orientation, which is a protected class. Furthermore, California has very broad anti-discrimination laws. Although federal and most state laws make it illegal to discriminate against people based upon their sex or gender when it comes to jobs and employment, California actually makes it illegal for businesses to discriminate based on sexual orientation. However, lower socioeconomic status is not a protected class. For these reasons, it is unlikely that a discrimination case against The League will be successful.

The League has so far only launched in San Francisco, but plans to expand to other large cities such as New York and Los Angeles, depending on interest. Ultimately, the development of novel application-based programs will continue to provide innovative ways to various walks of life. It will be an interesting company to follow as it expands to different regions.