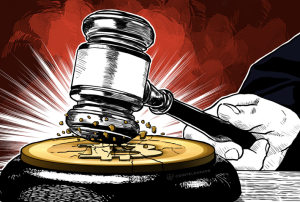 The Department of Justice has charged two of the law enforcement agents involved in the complex multi-agency investigation into the Silk Road for stealing hundreds of thousands of dollars (at the very least) in bitcoins.

When charges were announced against Ross Ulbricht in October 2013 and the website was shut down, the authorities called Silk Road “the most sophisticated and extensive criminal marketplace on the internet.” Several thousand drug dealers and other vendors used the site from January 2011 through its closing to sell hundreds of kilograms of illegal drugs and other illicit goods to more than 100,000 buyers, according to charges filed in Manhattan. The site generated over $213 million in revenue during that period, and Mr. Ulbricht, operating under the pseudonym “Dread Pirate Roberts,” took millions of dollars in commissions, federal prosecutors in Manhattan charged. (We previously covered takeaways from the trial here.)

It was revealed this week that two agents, former U.S. Secret Service Special Agent Shaun Bridges and former Drug Enforcement Administration agent Carl Mark Force IV, had allegedly engaged in money laundering and fraud during their investigation of the dark web marketplace. In short, the federal agents sought to enrich themselves by exploiting the very secrecy that made the site so difficult for law enforcement officials to penetrate. A trove of court documents were unsealed on March 31st, shedding light on what happened behind the scenes before the trial even began.

The case and the investigation are tainted by multiple corrupt schemes. A state’s witness took the fall for an agent’s theft, thus becoming the target for a murder-for-hire—a murder that was then faked by the same agent. The case was further compromised when Force and Bridges allegedly exploited every opportunity to embezzle and steal money. To utilize the mass of bitcoins they acquired, they coaxed various bitcoin and payment companies to help convert their ill-gotten gains to dollars. When companies resisted, investigations were launched, subpoenas were issued, and civil forfeitures were sought in retaliation.

The investigation into Force and Bridges began on May 2014, a year after Ulbricht’s arrest. Not only did the agents siphon bitcoins into their personal accounts, but Force was also essentially a double agent working under a series of different personas on Silk Road that alternated between extorting Ulbricht and selling him information from the federal investigation.

Between 2012 and 2013, while Force was investigating the Silk Road, he deposited into his bank account about three times the amount of money he was making on his government salary. He also paid off the mortgage on his house, repaid a $22,000 government loan, wired $235,000 to an offshore account in Panama, and invested tens of thousands of dollars in real estate and stocks.

Although the investigation into Force and Bridges began well before Ulbricht’s trial, Ulbricht’s defense was kept unaware of it until about five weeks before the trial date. The prosecutors moved to keep the information sealed, and nothing about the corrupt investigation appeared in the trial. As Ulbricht’s defense now alleges, this raises issues of due process: because facts about what Force and Bridges did were not allowed to come to light, did Ulbricht get the trial to which he was entitled? The defense says no. Ulbricht’s attorney filed a motion after the trial ended accusing the government of a Brady violation (failure to disclose evidence favorable to the defendant) and calling for a new trial. It is yet to be seen how these new developments will affect the motion for a new trial, or any appeals the defense will propose if that should fail.

However, this does not mean that Ulbricht will be exonerated. Surely, this is a staggeringly strange case that certainly requires a second look. But Ulbricht nearly convicted himself with repeated mistakes and arrogance, by keeping a crime diary where he outlined every single thing that happened on the off-chance he could get a book deal. It will be unlikely that the defense will succeed.