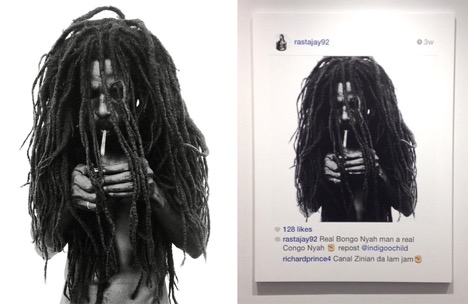 Sound familiar? The incidents seem to be an ugly throwback to 2015, when Prince took screenshots of multiple photographs from the Instagram account of pin-up brand Suicide Girls, printed them, and sold each print for $90,000. But none of this is new ground for Prince. Such incidents define his forty-year career: rephotographing the photos of others, reprinting J. D. Salinger’s The Catcher in the Rye with his own name substituted for the author’s, or writing out lines out of joke books for display at art galleries.

As a result, it’s hard to call Prince an artist. Rather, as an appropriation careerist, his work goes not to expanding aesthetic or creative principles, but to baiting the U.S. legal system. He’s perhaps best known for the 2013 copyright infringement case Cariou v. Prince, in which Prince took photographs out of Cariou’s book on Jamaica’s Rastafarian community and ‘remixed’ them for a gallery exhibit. During his deposition, Prince grandly admitted that he “didn’t really have a message” in his work, nor any intent to comment on Cariou’s originals—traditionally a key factor in finding fair use. Yet the Second Circuit held that many of Prince’s appropriated pieces were sufficiently transformative and thus did communicate a message — which gave him a perfect right to make free fair use of Cariou’s photographs.

This decision shook the fair use doctrine to its roots. It’s important to recognize, however, that Cariou’s impact was particularly and uniquely American. It’s hard to imagine Prince arguing for the legitimacy of his work in territories which have recognized authorial moral rights—specifically, the individual’s rights to be recognized as a work’s creator, to prevent alteration to the work, and to dictate the ways in which the work can be displayed.

Almost all such moral rights are nonexistent in the U.S. For various reasons—free speech concerns, the desire to encourage creativity, reluctance to impose judicial priorities on aesthetic values—U.S. copyright law has historically veered from moral rights, choosing instead to play fast and loose with the creator’s power to control derivative works. Even the Visual Artists Rights Act, which is a unique carve-out in copyright law, only grants conditional moral rights to artists with works consisting of 200 or fewer copies, and has seen limited success in court.

No other intellectual property field offers such broad exemptions. By leveraging another’s confidential information for use in a larger work, one unquestionably commits trade secret misappropriation. By co-opting a competitor’s trademark, one infringes or dilutes that mark. It’s hardly worth getting into patent law, a field notoriously so protective of the inventor’s extensive rights that part of the patent application process involves trawling through prior art to minimize overlap.

These restrictions exist to prevent unfair competition—a double-edged proposition in copyright law, where minimizing any competition may dangerously chill creativity. Cases like Prince’s, however, showcase the uglier side of this judicial reluctance: that it protects the nebulous promise of future creativity at the expense of the individual artist. Such a perspective ignores that art exists, not in a vacuum, but in a marketplace—a fact made increasingly prominent by the dwindling consideration for the fourth factor in fair use analyses, which is to consider harm to the potential market for the work —and that its proceeds generally ensure that artists have the funds to continue creating. It constructs a world where an aging man with an Instagram and a printer can roll to the nearest image of a famous performer or a well-posed model, hit “PRINT SCREEN”, and be praised as ‘semi-revolutionary‘.

The three current suits against Prince have yet to see real development—Salazar v. Prince and Morris v. Prince were filed in the past two weeks, and Graham v. Prince has just entered a request for oral argument regarding the defendant’s motion to dismiss. Nevertheless commentators have already emerged to argue both the similarities to, and distinctions from, the Cariou decision. Any of these three cases may go a long way towards concretizing the modern standard for fair use.

In all of copyright law’s uncertainty, what’s clear is this: Richard Prince is a joke. Unfortunately, his punchline is the fair use doctrine.