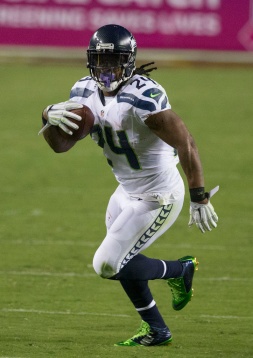 Marshawn Lynch is a product of Oakland, California and stayed near home for college to play football for the California Golden Bears in Berkeley, California. He was drafted by the Buffalo Bills in 2007 as the 12th overall pick and is known for being one of the most violent, “down hill” running backs in NFL history. This style, along with this off-the-field persona and antics with the media have made him a league favorite – endeared by some, despised by others, but known to all.

Whether Lynch can make the return he envisions depends heavily on what contract and labor law has to say.

When a player is drafted or signs with a team as an undrafted free agent, the team obtains the rights to that player for the duration of the contract. When players retire before their contract expires it is called a “Forfeitable Breach” under the NFL-NFLPA Collective Bargain Agreement. If the player’s current contract at the time of retirement has remaining years, the team may place the player on the “Reserve/Retired List,” which effectively tolls the contract while retaining the player’s rights. The salary for the remaining years on the contract owed to the retiring player no longer counts toward that team’s salary cap, with some exceptions for bonuses and other awards. Should the retiring player ever desire to come out of retirement, the team would retain the rights to the player under the existing terms and duration of the contract at the time of retirement.

Marshawn Lynch currently finds himself  on Seattle’s Reserve/Retired list. When he retired from the Seattle Seahawks in 2016, there were two years remaining on his three-year, $31 million contract. The contract contained relatively intricate bonus structures, but the important piece for this analysis is that if Lynch returns, he is set to count for $9 million toward someone’s salary cap in 2017. Lynch is 30 years old, retired following a relatively underwhelming year, and the Seahawks do not have the cap space nor the desire to  reunite with Lynch, leaving few options for Marshawn’s return.

Option 1: Upon Lynch’s petition to return from retirement, the Seahawks could release him. A release effectively relinquishes a team’s rights to a player and any obligation to the salary that is not guaranteed. Under option one, Lynch and the Seahawks are cleanly rid of each other but whoever signs Lynch would have to count his $9 million contract towards their salary cap. With so many unknowns surrounding Lynch, it’s hard to say if a team would want to take the risk.

Option 2: Trading Lynch. Aside from the fact that the Seahawks have no cap space for the $9 million salary, why would they release a player that other teams desire without getting something for him. One of the most valuable assets in professional sports is owning the rights to a desirable player. The Seahawks have that in Lynch’s desire to come out of retirement. Therefore, the Seahawks could attempt to negotiate a trade with the Raiders. However, it is unlikely that the Raiders have $9 million in assets that they are willing to give up for Lynch. Oakland probably views a potential Lynch addition as increasing quality, depth, and doing right by Oakland, but the $9 million cost is perhaps too rich for their blood.

While Option 3 seems the most complex, it certainly feels the most likely. That is until rumor hit that there is mutual interest between the New England Patriots and Lynch on April 10, 2017. With other teams starting to see the value in a Lynch return, it appears that the Seahawks may have a much more valuable trading tool than they originally bargained for.