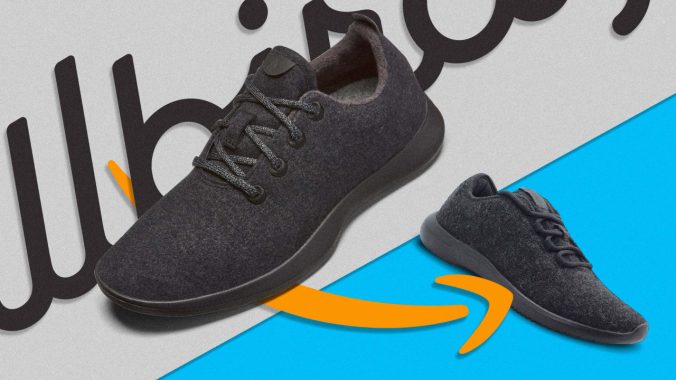 In just over five years, Allbirds Inc. successfully built a billion dollar company around what have been referred to as “the world’s most comfortable shoes.” Any discerning observer just needs to walk around tech cities like Seattle or San Francisco to see a small army of young professionals wearing the distinctive lightweight wool shoes. Allbirds provides sustainable wool athletic sneakers that are made almost entirely of natural materials. The company’s website specifies that the shoes are made using “materials that exist right in front of us” in order to reduce the environmental impact of the retail process. A standard pair of Allbirds contains recycled bottles, sugarcane stalks, and castor bean oil rather than inorganic materials that would have a larger environmental footprint. Additionally, Allbirds’ direct to consumer model allows them to utilize a box which functions as a shipping box and shoebox all in one. The box contains about 40% less material, is made of 95% recycled cardboard, and is 100% recyclable.

With the rapid success of Allbirds, the company has had to utilize an aggressive legal strategy to protect its brand from other major players in the fashion industry. In trademark law, the concept of trade dress is a protectable element of a business’ product and generally consists of that product’s appearance and how this appearance indicates its source in much the same way as a brand name or logo. For example, Allbirds claims that its trade dress consists of a “sneaker-type shoe featuring wool-like texture on the entirety of the upper outer; embroidered eyelets; shoelaces composed of a three-yarn lace woven together; midsole and outsole of shoe appear attached as one piece; and a series of horizontal lines visible across the width of the sole of the shoe that extends the entire length of the sole.”

In 2017, Allbirds filed a complaint in the Northern District of California for trade dress infringement and unfair competition against Steve Madden Ltd. Allbirds alleged that Steve Madden copied the design of its signature wool lace-up sneaker to create the “women’s traveler sneakers.” Specifically, Allbirds alleged that Steve Madden’s use of Allbird’s Wool Runner trade dress was likely to lead to and result in a public belief that Steve Madden’s products were authorized or otherwise connected to or affiliated with Allbirds. The lawsuit was quickly settled, but Allbirds promptly brought another similar trade dress infringement claim against Austrian footwear company Giesswein Walkwaren. The basis of Allbird’s complaints in both these actions was that the defendants deliberately and willfully copied the appearance of its signature footwear, thus violating the protected trade dress of its wool trainer.

Now, Amazon’s fashion label has released an almost identical version of Allbird’s distinctive wool runner, which it has titled the “Galen shoe.” However, rather than pursue legal action, Allbirds is taking a more nuanced approach. Amazon’s size and nearly unlimited resources make pursuing legal action a daunting task. Allbirds, although growing rapidly, still only has about 500 employees. This discrepancy in size and market power makes the thought of pursuing litigation all the more unpleasant. Instead, Allbirds is using Amazon’s alleged copying as an opportunity to publicly draw attention to Amazon’s lack of emphasis on sustainable business practices. Allbirds is bothered by the similarities between the shoes, but is more upset by the online giant, with “all of the resources in the world,” failing to mimic its sustainable practices. Environmentally sustainable business practices are a major component of Allbirds’ business model and would welcome a hugely influential company like Amazon to “knock off [their] sustainable practice.”

In stark contrast with Allbirds, Amazon’s website contains no specifics about the origins of the materials in its own Galen shoe, nor does it make any claims about the sustainability of the sneakers. The Amazon board also recently rejected a motion to pass a climate proposal. The company has also turned its back on a commitment to double down on renewable energy. Amazon’s general lack of emphasis on the importance of environmentally conscious business practices has prompted outrage even from the company’s own employees. Even with profits skyrocketing (Amazon made over $70 billion in revenue during Q3 of 2019 alone), CEO Jeff Bezos is facing pressure from more than 8,000 Amazon employees who have signed an open letter calling on Amazon to do more to promote sustainability efforts.

As a small startup company, Allbirds lacks the resources to spend an indefinite amount of time and money fighting a legal battle against one of the largest companies on the planet. Allbirds CEO Joey Zwillinger recently stated that pursuing a legal action against Amazon would be “risky” and that it would not be a “fair fight” due to Amazon’s size and influence. Instead, Zwillinger has been directly attacking Amazon’s lackluster sustainability practices on various news media outlets. This strategy is a novel response to the ever-present issue of a competitor attempting to steal another company’s intellectual property. The prohibitively expensive nature of a copyright or trademark infringement claim could result in in more start-up companies following Allbirds’ lead: going after other negative components of a potentially infringing competitor to dissuade customers rather than pursuing more traditional, and more expensive, legal actions.