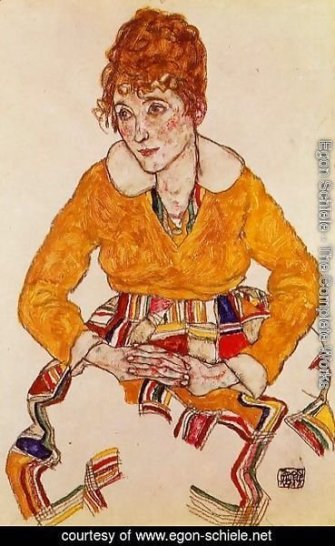 The ownership of a 1917 watercolor by Austrian painter Egon Schiele is currently being contested in a three-way legal battle. The painting, Portrait of the Artist’s Wife, was purchased by award-winning documentary filmmaker Robert Lehman in 1964 from the Marlborough Gallery in London. In 2016, Mr. Lehman transferred ownership of the work to his family’s foundation to be sold at auction. It was the auction house, Christie’s, that recognized the painting’s potentially questionable provenance and contacted Israelitische Kultusgemeinde Wien (IKG), which represents the Jewish community of Vienna, about the painting’s history. IKG recognized Eva Kirkl as the painting’s true owner. Ms. Zirkl, who has had other works by Egon Schiele returned to her, is the heir of Karl Mayländer, a Jewish businessman and art collector who was killed during the Holocaust. The third party to the dispute over the painting consists of the Robert Reiger Trust and heirs of Heinrich Rieger, Egon Schiele’s dentist and an early collector of his work, who also died during the Holocaust.

The History of Nazi Art Theft

During Nazi rule and World War II, the Nazis used several tactics to loot artwork. These tactics proved devastatingly effective and continue to muddy provenance research, making it harder to resolve disputes like this one. Nazi bureaucratic agencies were established and sent into occupied territories to confiscate art and other cultural property. These agencies purchased objects, coerced people to sell, and engaged in brutal plunder. The Decree Regarding the Reporting of Jewish Property forced every Jewish person to assess their property and report to the Nazi authorities. Jewish business owners were forced to sell their assets to non-Jewish people. Synagogues, libraries, and archives were looted of their cultural property and Jewish-owned art collections were deemed “ownerless” by Nazi decree. Nazis seized the property of those forced into concentration camps and replaced provenance records with counterfeits. Nazi art theft was also accomplished by coercing signed transfers of ownership under duress, and Jewish people fleeing the Holocaust were compelled to sell their artworks for very small sums out of desperation.

The Continuing Consequences of Nazi Theft

Given the devious, systematic manner in which artwork and cultural property was stolen from Jewish owners, many pieces of work disappeared into the market, surfacing later in other private collections and museums, where current owners often argue they should stay because they were purchased in good faith. Aggravating the already fraught issue is the fact that museums and collectors are often reluctant to acknowledge that artwork can carry with it a dark history. Moreover, the process of tracking down the correct provenance and researching a work’s background is expensive. Since many pieces of Nazi-looted art traversed nations and became lost to heirs for generations, there are often questions regarding which country’s law should apply as well as when a claim starts to accrue, and the statute of limitations begins to run.

Attempts at Resolution and Restitution

The Holocaust Expropriated Art Recovery Act of 2016 (HEAR) is an act of Congress that aimed to alleviate some of the challenges preventing restitution to allow for claims of looted art to be “resolved in a just and fair manner” by providing a uniform statute of limitations. It provides that a claim for the recovery of art or property lost between January 1, 1933, and December 31, 1945, as a result of Nazi persecution may be commenced no later than six years after “actual discovery” – knowledge – of the identity and location of the work and a possessory interest in the work.

The HEAR Act represents a concrete attempt to fulfill the Washington Principles on Nazi-Confiscated Art, which is a non-binding agreement signed by 44 governments and 13 NGOs. The Principles encourage identification and restitution of Nazi-looted art, but they also recognize the barriers to restitution presented by history, saying that “consideration should be given to unavoidable gaps or ambiguities in the provenance in light of the passage of time and the circumstances of the Holocaust era.”

While the Washington Principles aim to conscientiously address the difficulties surrounding ownership of looted artwork, implementing the Principles has proven to be a slow, often frustrating process. Only five governments have developed national processes to execute the Washington Principles, particularly pertaining to alternative dispute resolution mechanisms. And in 2015, the World Jewish Restitution Organization reported that US museums increasingly evade claims asking for art to be restituted by avoiding resolution of such cases on the merits.

The HEAR Act has had its successes, however. It’s applicability was upheld to the benefit of the heirs of Fritz Grünbaum, returning to them two other watercolors by Egon Schiele, with the judge emphasizing that conveyances made by victims of the Holocaust under extreme duress cannot be valid. Furthermore, various organizations have curated resources for research into art identification and continue doing that work to aid in the rediscovery of lost and looted art, like the Museum of Modern Art’s Provenance Research Project and the Central Registry of Information on Looted Cultural Property 1933-1945.

It’s true that the difficulty of divining a piece of art’s true provenance is compounded by time and travel across borders, with art often passing through several hands, as illustrated by the three claims laid to Schiele’s portrait of his wife. But that difficulty should be met with equally persistent attempts to recognize history by learning and acknowledging the painful past that artwork can carry.