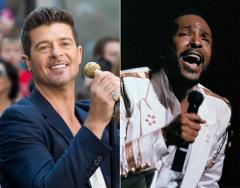 Call it one more heartache for Robin Thicke. He’s at the center of another controversy—this time, a copyright infringement suit with Marvin Gaye’s heirs over Thicke’s summer hit, “Blurred Lines.” While allegations of plagiarism and copyright infringement in the musical world aren’t new by any means (in fact, it seems to be an industry pride and joy), this suit presents a different, potentially precedential angle: the Gaye family alleges not only copyright infringement but a breach of fiduciary duty by EMI (the music publisher that holds the rights to distribute Gaye’s works and supposedly co-owns “Blurred Lines”)  for refusing to bring suit against Thicke.  In so alleging, they add to their fairly interesting copyright claims an unexpected legal question: is an exclusive agent representing a copyright holder’s interests required to bring suit over infringing works that the agent also owns?

Thicke heard through the grapevine that Gaye’s heirs might bring suit alleging that “Blurred Lines” infringes on Gaye’s “Got to Give It Up.” On August 13, 2013, Thicke filed a preemptive complaint (after a six-figure settlement was supposedly declined by the Gaye family) in the Central District of California, seeking declaratory judgment of non-infringement. But it takes two to sue, and on October 29, Gayes’ heirs responded with a hearty “let’s get it on.” Their counterclaim alleges that not only does “Blurred Lines” infringe, but another Thicke track, “Love After War,” infringes on Gaye’s “After the Dance.” The Gaye family presented two potential smoking guns: (1) a report by musicologist Judith Finnell, pointing out the substantial similarities between the tracks, and (2) an interview with GQ in which Thicke pledged his love to “Got to Give It Up,” and indicated his intention to “make something like that.”

Thicke, for his part, argues in his original claim that the Gaye family is trying to copyright an entire genre, and that “Blurred Lines” is not a rip-off of “Got to Give It Up,” but rather an attempt to “evoke an era.” Is that enough for Thicke to avoid culpability? Reasonable minds might disagree on whether Thicke substantially copied Gaye’s song. Some might say it’s madness to say they’re different—just stop, look, and listen. Others might find it a far cry to compare them. But Thicke’s praise of Gaye’s repertoire may ultimately work against him. The second element of copyright infringement is actual copying, which can be inferred partially through access to the work by the infringer—a court might see this as evidence of substantial access. The “inverse ratio rule,” still in operation in the Ninth Circuit, lowers the standard of proof for showing similarity when the degree of access is great. While this doesn’t mark the end of the road for Thicke, it might prevent him from flying high above it.

More interesting is the Gaye family’s claim against EMI for bad faith dealing and breach of fiduciary duty. In doing so, they cite a 1959 case from the Southern District of New York, Manning v. Miller Music Corp., for the proposition that refusing to bring a suit against a third party on behalf of a fiduciary’s cestui is an abuse of trust. Manning is not binding precedent in the Central District of California, but it does raise an interesting question: is EMI, as the exclusive agent of Gaye’s musical works, obligated to bring suit against infringers for works that it co-owns? Gaye’s family alleges that EMI not only refused to bring suit, it also actively tried to stop the family from doing so. Given the trends towards consolidation in the music industry, a court decision on the fiduciary duty question could have wide-ranging implications. A decision in favor of the Gaye family on that claim could result in record companies being chained, via fiduciary duties owed to copyright holders as exclusive agents, to bring infringement actions against other artists within their own stables. Until then, we can only guess at what’s going on.