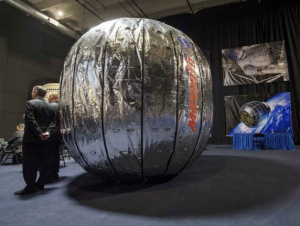 No one from Earth has been to the moon since 1972, but Google’s Lunar XPRIZE has sparked an interest in returning. The Lunar XPRIZE is a race to the moon in which competitors must land a robot safely on the moon and send back “HDTV Mooncasts for everyone to enjoy.” The deadline is next year and it has created a growing interest in moon activity. One company, Bigelow Aerospace, has even developed inflatable habitats to set up in space. The program, known as BEAM, has been developed as an attachment to the International Space Station, but Bigelow would also like to launch these habitats to the Moon. Even though the 1967 Outer Space Treaty bans sovereign ownership rights to the moon, Bigelow may one day soon be allowed to place its habitats on the Moon.

As was outlined in a recent WJLTA blog article on Asteroid Mining, the Outer Space Treaty and the Moon Agreement currently govern space law. Though no sovereign can claim ownership in space, the Outer Space Treaty has potentially left open a loophole that could allow for nongovernmental, private entities to have ownership rights in space. Additionally, the 1979 Moon Treaty, which governs lunar activity was never signed by the U.S., leaving open another potential loophole for private American entities.

In light of all of this, the FAA has been deemed the current governing body for U.S. outer space exploration. The FAA released a statement to Bigelow in December in which the agency stated that it intends to “leverage the FAA’s existing launch licensing authority to encourage private sector investments in space systems by ensuring that commercial activities can be conducted on a non-interference basis.” In other words, the FAA plans to issue licenses to companies to encourage space exploration. However, it also noted in the letter that the current national regulatory framework is not equipped to handle this.

Luckily for the FAA, a regulatory framework is being proposed to enable and encourage space exploration. The Space Settlement Prize Act would give private companies the opportunity, after establishing permanent settlements, to be given official recognition by U.S. Courts of a private claim of land on the Moon or Mars. Of course this is potentially at odds with the international framework, but perhaps the legislation would finally encourage the rest of the world to address this growing concern. Some have proposed that the same legal framework that is being used for the International Space Station should be implemented to handle property rights in outer space. This framework has been working well, and prominent space lawyer Joanne Gabrynowicz has suggested using it as precedent.

When it comes to property rights in space, everything is still up in the air (or beyond it). However, as private companies begin to develop the technology, the very real possibility of habitations on the Moon and the mining of minerals in outer space must be addressed within the regulatory framework. Bigelow won’t currently have property rights if it lands habitats on the Moon, but the FAA will at least ensure that no one lands on top of them.