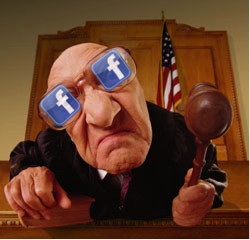 This March, in FTC v. PCCare247, Inc., the Southern District of New York ruled that serving notice over Facebook was constitutionally adequate for service of process on international defendants. (https://www.ftc.gov/enforcement/cases-proceedings/122-3243-x120057/pccare247-inc-et-al). In this case, the defendants were located in India, and more traditional means of service had failed. Under FRCP 4(f)(3), a judge can order means of process, so long as it is “(1) not prohibited by international agreement; and (2) comports with constitutional notions of due process.” International conventions do not prohibit service of process via Facebook and, as the S.D.N.Y. stated, the circumstances in which the Facebook accounts would be served ensured service was constitutionally proper. In PCCare247, Inc., service was sent in two ways: via email and through Facebook Messenger. The court found that the defendants’ Facebook accounts were legitimate because they listed the defendant company as the defendants’ current employer, and a number of the defendants were friends with each other on Facebook. This, along with the similarities between Facebook Messenger and email, convinced the court that the standards of due process were met.

The circumstances in which service via Facebook Messenger amounts to adequate constitutional service of process appear to be limited. But such an option raises new questions about how the law adjusts to new technological realities. If Facebook Messenger, like email, can provide adequate notice, then why not establish it as an adequate form of process in every circumstance where service is required? Service via Facebook would be incredibly efficient; it does not require paper, payment to a service agent, and is delivered instantaneously. There is also no need to hunt down the person that must be served. However, there are some drawbacks. What if the person never checks their Facebook Messages? What if the person sees the message, but decides not to open it? If the defendant and the serving party are not friends on Facebook, then they message will go to an inbox other than Facebook Messenger. It is possible the sender would never know if the defendant ever received the service. Furthermore, there is a sizeable risk of fraud. One can imagine hundreds of elderly people getting Facebook Messages threatening legal action unless they send $1000 to a bank account somewhere. Ultimately, service via Facebook Messenger could definitely make service of process much easier. But before seriously considering whether serving someone through Facebook meets the requirements of due process, we should consider whether we even want Facebook to become a platform for sending important legal documents.