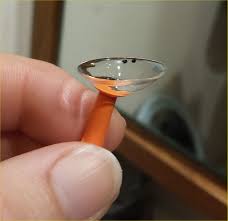 developed that allowed users to have hands-free, smart technology integrated into their eyewear.

Well, Google Glass did not do as well as projected, and Google ceased production in 2015. However, Google and Samsung are now rumored to be taking “wearable technology,” like Google Glass, to another level.

Both Google and Samsung are reportedly developing similar “smart” contact lenses. News surfaced on April 5, 2016 that Samsung submitted a patent application  for contact lenses with built-in cameras and other features. And both companies’ patent applications describe contact lenses containing a camera, sensors to detect movement, and antennae to interface with smart devices. Some speculate that blinking could control the lenses, which poses potential concerns over accidental commands.  However, by placing the device directly on the eye, the companies hope to improve clarity and accuracy, features that Google Glass lacked.

While this advancement breaks significant ground for applications like visual aids for the blind and Google’s application for blood sugar level monitors, the lens could also create serious privacy concerns . For example, the proposed lenses will enable the wearer to photograph or record someone with virtually zero indication to the subject. This poses innate risks to privacy (similar arguments emerged against Google Glass.)  From a legal standpoint, when a person steps out of the home and into the public sphere,  rights to specific privacies are lost, most notably rights associated with photographs. However, everyone has a right of publicity, which includes rights to their own likeness and legal recourse when another tries to profit from their likeness.

The issues created by “smart” contact lenses also differ from other products currently on the market because of their covert nature. Consider how such devices could be monitored in restrooms. Detecting if someone is using this wearable technology in restrooms, dressing rooms, or other semi-public forums where privacy is expected will be virtually impossible. What about these devices’ susceptibility to hacking? Susceptibility to involuntary use is also a concern, which includes hacking, debris in the user’s eye, or malfunction. Could seeing a live feed from someone’s Facebook account become a visual peek into what someone else is doing? How might this change the paparazzi or TMZ? Although current stalking laws and right to publicity laws appear robust enough to shelter some of these potential privacy infringements, these devices will undoubtedly raise the likelihood of guerilla photography and covert surveillance. Answers to some of these questions an unattainable at present, but will certainly be of import for policy makers around the country and world in the coming years.

Wearable technology might also have application in the police body camera conversation. Some wearable body cameras for police officers are already susceptible to obstruction or manipulation, resulting in an evasion of the public policy rationales for utilizing them. Contact lenses showing the officers’ perspective could also bring police oversight into a new chapter. But such footage might also pose issues for jurisdictions with rigorous and burdensome public records laws, such as those in Washington State.